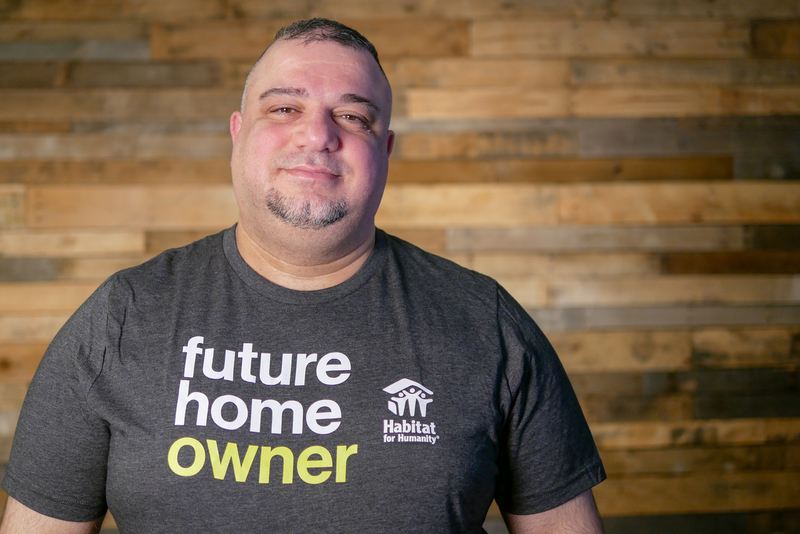 family and current housing
Twenty years ago, Issa Abu Al Habil left his birthplace, Damascus, Syria, and came to the United States as a student. Today, as an American citizen, Issa is proudly pursuing the American dream of owning his first home and providing a safe, decent, affordable house for his children. Issa’s path to homeownership has been long, and, at times, difficult. He struggled financially and was often told he would never be able to purchase a home. After separating from his wife, Issa spent five weeks in a shelter which prevented him from being with his children. He eventually moved into a rental apartment. That apartment was a poorly converted basement without any bedrooms, so once again Issa struggled to have a place to house his children. He currently lives in a one bedroom apartment which is better, though still not a perfect solution for the father of two. When he heard about the possibility of affordable homeownership through Habitat, Issa decided to apply. Unfortunately, he did not initially qualify because of his debt history. Rather than be deterred, Issa worked to improve his financial situation and upon reapplication, was welcomed into the Habitat program. Although Issa humbly admits he sometimes feels like a failure as a father, it is abundantly clear that he is committed to doing right by his kids. “A house will create stability for them. A house will be safe. It’s something I have to do, I must do, for my kids,” Issa emotionally explained. “So, I’m grateful this is going to happen. It’s part of my journey.” Issa’s oldest child, sixteen-year-old Amira, is a sophomore who enjoys working with computers and may someday pursue a college degree in business. Nabeel is fourteen and an avid “youtuber.” This special young man is severely mentally handicapped. “In the long term, my son who is severely autistic will have a place for the rest of my life,” explained Issa. “And even after I’m gone it’s their house, so they will have that. I feel confident and happy about that!” For Issa, not being able to give his children a yard with a swing set feels like a past failure. But he joyfully looks forward to finally having a safe place for his family to enjoy and specifically to plant a garden for the first time.

a bright future
Like all Partner Families, Issa is working hard to provide this housing opportunity to his family. While waiting for his house to begin construction, Issa has thoroughly enjoyed building relationships and community connections during sweat equity on the worksites of other future Habitat homeowners. He also completed classes with a financial counselor to prepare for the responsibility of owning a home. Along with completing Habitat program requirements and being a father, Issa works hard to provide financially for his family at his retail job. Soon, all his hard work will pay off and Issa’s family will have a safe, decent, affordable home of their own! “This place will be the first home I have ever owned, and it will be the legacy I’m leaving,” said Issa. “My kids will know I worked hard, and I put sweat equity into this house. It’s not just a house, it’s something I’ve worked on for years.”
CLOSED