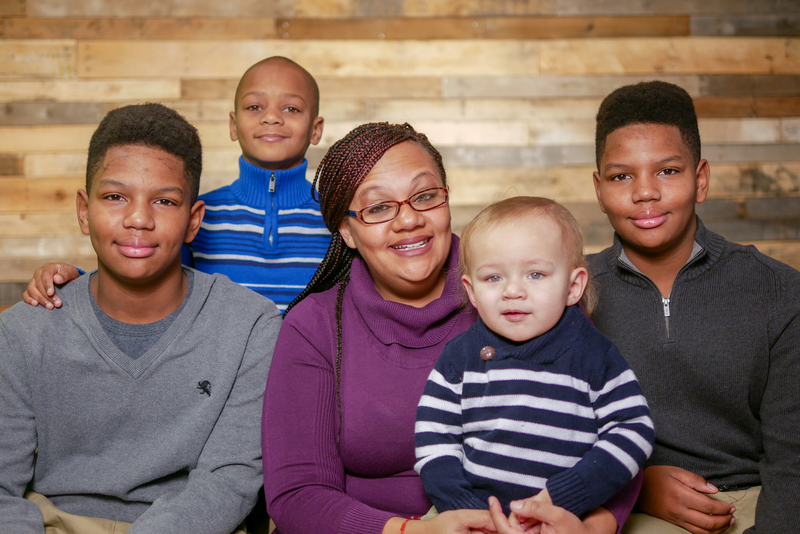 family and current housing
When Habitat staff sat down with future homeowner Cottie Vanderpool to talk about her journey to homeownership and what this will mean to her family, she opened up about the long road that has led her to this exciting opportunity. For years Cottie and her children have moved between substandard rentals, and Cottie humbly admits it was often due to her poor decision making. But she refuses to be defined by past mistakes and decided to apply for Habitat after a coworker who recently completed the program encouraged her to do so. For the past three years Cottie and her children have lived in a rental directly across from the abandoned Lehman school building. The abandoned building draws loiterers, vagrants, drug use, mice, and other pests. Both her car and home have been broken into and vandalized. The home itself has issues, many related to faulty plumbing. There are buckets catching leaks under all the sinks; the claw-foot tub has leaked so badly the floor beneath is rotten, was removed in some places to reveal the plumbing, and leaks into the kitchen below; and the basement has flooded numerous times and now has a mold problem. Screens are missing from most windows; the heavy wood doors swell in the summer to the point they will not open or close; carpet was removed throughout but not replaced so the subfloor and tack strips are exposed; and the front porch is missing floorboards. After three years of dealing with these issues and others, Cottie is ready for a fresh start in a place she and her sons can call their own. Cottie’s oldest boys are twins Sebastian and Savian. Sebastian is perhaps shyer than his free-spirited twin, but both enjoy baseball and are straight A students. Cottie’s “little helper” is eight-year-old Javier who also plays baseball. The baby of the family is one-year-old Mateo. Mateo was born with club feet and is currently undergoing corrective treatment. Cottie’s immediate and extended family are a close group. Having a place to host family gatherings will be such a blessing.

a bright future
During her time in the Habitat program, Cottie has already invested numerous hours of sweat equity at ReStore, on worksites, and in House2Home education classes. Her outgoing personality and willingness to share made her a valuable member of the large group discussions in education classes. Although she enjoyed the classes and being helpful at ReStore, Cottie, like all Habitat Partner Families, is most excited for the hours she will spend building her family’s future home. In addition to raising her four boys and completing Habitat sweat equity hours each week, Cottie works fulltime as a clerk at a local pediatricic office – a job she has enjoyed for over eight years. Despite her busy schedule, Cottie has maintained a positive attitude and strong work ethic as she pursues her goal of homeownership. “To think of everything I have been through, the thought of owning something that is for me and my boys truly means everything to me,” explained Cottie. We couldn’t agree more!
CLOSED